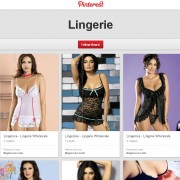 Read the introduction of Pinterest’s SEO and search engine

Similar to Pinterest’s impact on Google analysis, also here I will analyze the keywords in a chronological order. Let’s start from the March’s results. 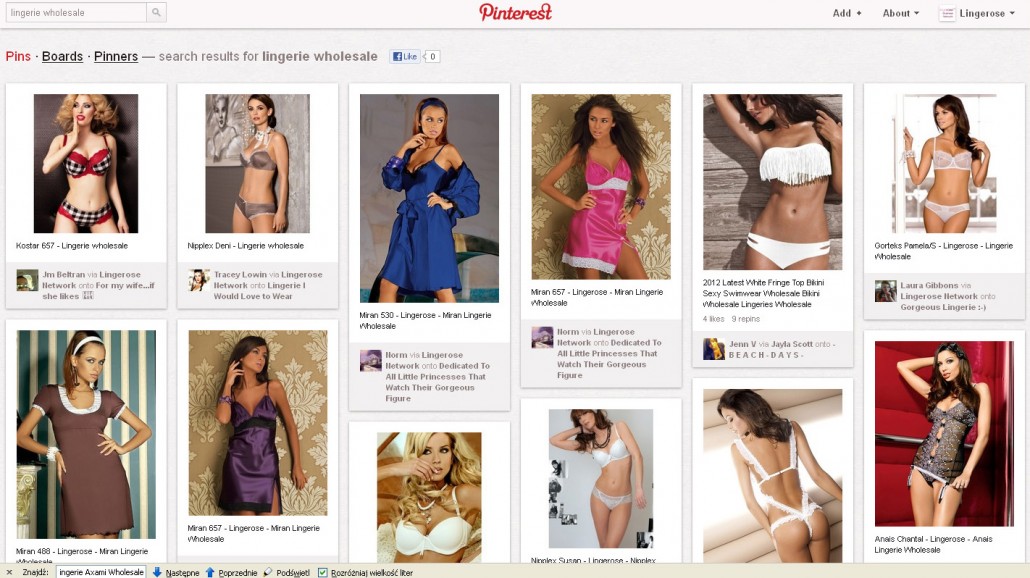 As you may see above there were 11 pins of the first 12 results that belonged to Lingerose.com.
30th of March 2013
3 days later, I noticed some significant changes. I kept the first 5 positions but in the first 12 results there were 3 pins which didn’t belong to the Lingerose’s account. In total, there were 11 Lingerose’s results of first 18 pins displayed for “Lingerie Wholesale” in Pinterest.
I decided to look closer at top pins and boards where they had been repined to.
The first position „Miran 488 – Lingerose – Miran Lingerie Wholesale” was added 10 days earlier to the “Dress to impress” board with 296 followers and 2,096 pins.
This board belonged to the user – “Now that’s Lingerie” with:
38 Boards
14,027 Pins
11,620 Likes
754 Followers
360 Following
This was the account of a lingerie online store – so probably there were many keywords related to the „lingerie” keyword used. The user and its board were also very active with many pins added and many signals (repins and likes) received.

The second position was occupied by the pin “Anais Florance – Lingerose – Anais Lingerie Wholesale” – added 3 days earlier to the “you got the look I like” board with 51 followers and 171 pins. 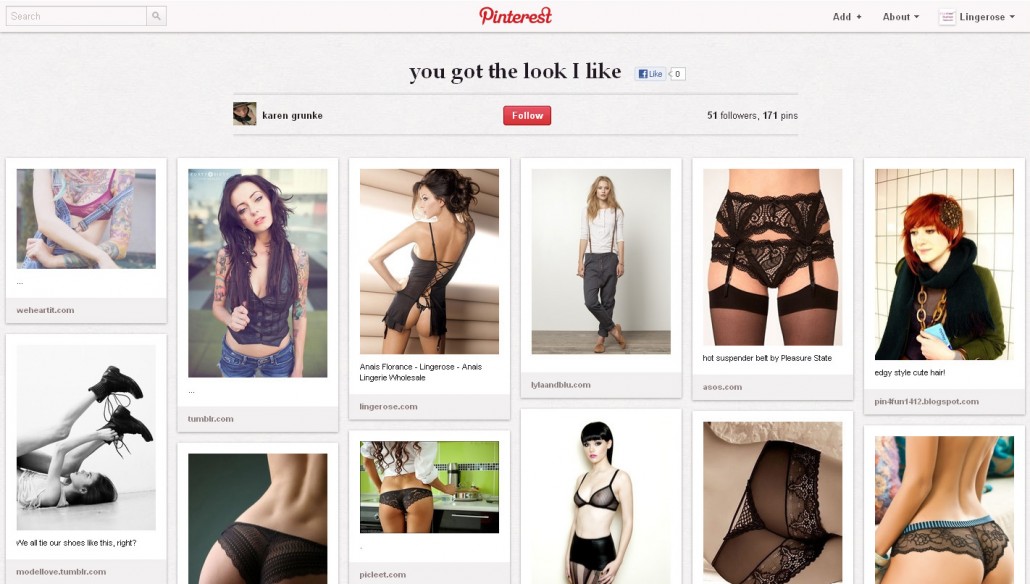 Comparing the results from the 27th of March, the first 2 pins were moved lower to the position 4 and 5. The position number 3 remained the same. Ok, so what could drive Pinterest to put the pins described above on the first 2 positions? The first one belonged to a strong board and account. What about the second one? Neither board nor account was strong enough to be considered as the important factor.
However, I found something else. As you can see, the Lingerose’s pin is placed in the first line and it might be one of the factors. I’d compare this to a very popular SEO tip – to put a keyword at the top of indexed text. Also, here, Pinterest’s search engine might pay more attention to pins at the very top of a board. Simple – it is just easier and quicker to catch those results.

9th of April 2013
On the 9th of April for the first time I noticed some interesting fact about Pinterest search engine. 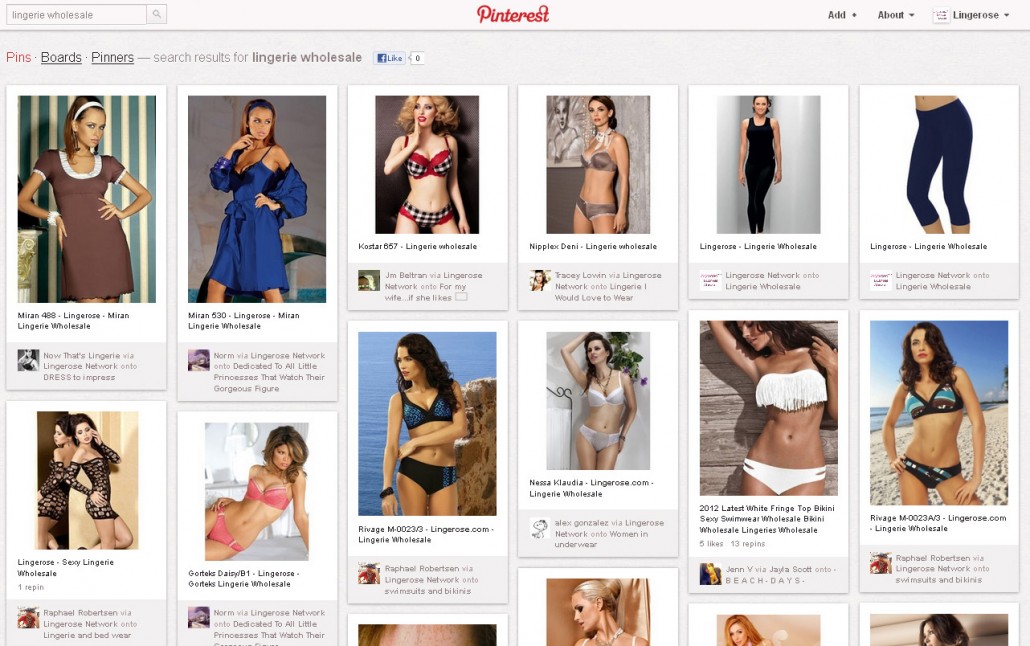 Again, 11 of the 12 first pins displayed, belonged to Lingerose.com. As you may see, the pins number 5 and 6 (the right top corner) come from the Lingerose’s board “Lingerie wholesale”. I didn’t repin those pins to any other group boards where I was a contributor. I can say that these two pins were exceptions because all other pins were always repined to some other group boards where I contributed.
By the way in the first 400 results – only 15 pins didn’t belong to my campaign. 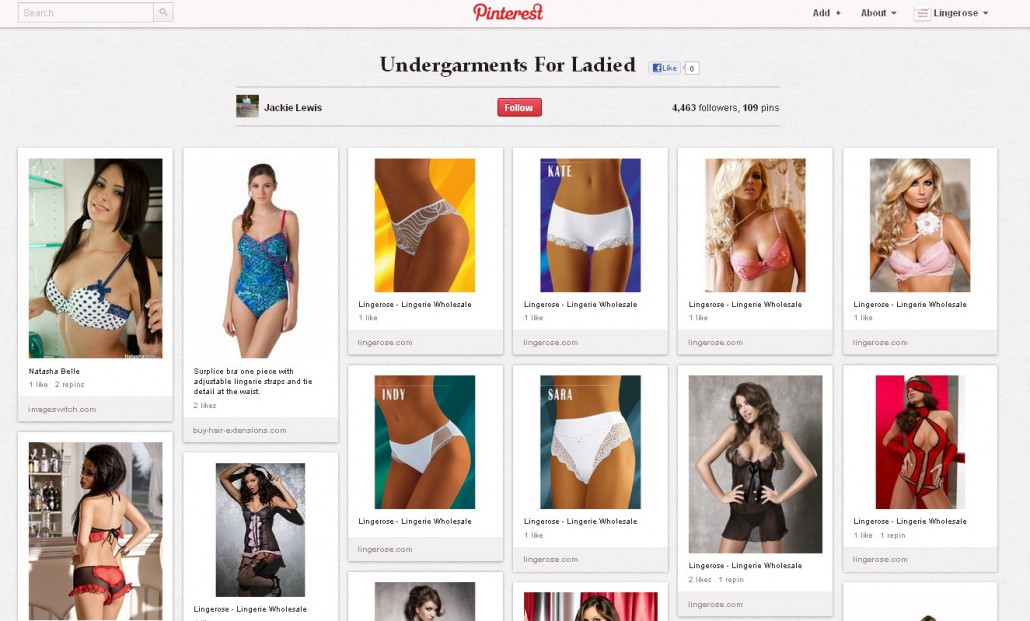 As you can see there were lot of my photos added to that board. The board belonged to the user – “Jackie Lewis” with:
286 Boards
21,846 Pins
137 Likes
5,451 Followers
18,259 Following
Ok, time for a little summary. I still didn’t want to believe that Pinterest displays pins in random order. What factors could Pinterest use to index the pins mentioned above and the boards – where they were pined to.

The 1st position – a lot of signals, 13 likes and 22 repins of my photo
The 2nd position – the keyword “lingerie” in the board’s name and its description, two of my photos with “lingerie wholesale” found in the first line, repined 8 days earlier
The 3rd position – 4 repins of my photo and a lot of my pins (with “lingerie wholesale”) found inside of that board, a strong account owner.
This is what I noticed that day. The most important factors in my opinion: signals, keywords (board name, board description, keyword density inside of a board, and strength of a user/board).
I also noticed that the highest ranked pins belonged to the boards which always included at least one of the Lingerose’s pins.
Of course, I might ask why Pinterest showed those results and why it didn’t show for example my pins from the “lingerie love” board where I contributed? There was a huge amount of my pins and keywords. The board and its owner was also very strong. And maybe I’ve just answered to that question to myself – the huge amount. Pinterest can use those factors in its search engine algorithm and on the other hand, if it detects too many of them in one place – it just ignores them.

So I already had some hypothesis – what might matter for the Pinterest’s search engine algorithm. Next months, I tried to verify my predictions and kept trying to find the best strategy for pins to be highly ranked in the list of search results.

29th of May 2013
I analyzed the first two pins which showed up in the search results. Of course, both of them came from Lingerose.com and were repined by the owner of the biggest group board where I was a contributor. That board belonged to the very strong account of “Valentina Ogurtsova” with:
206 Boards
25,687 Pins
681 Likes
22,591 Followers
1,408 Following

It is important to notice the positive ratio of followers to following. I think, in general, this is a very important factor of all social media’s accounts, not Pinterest only.
The board itself where the pins were added was also powerful. 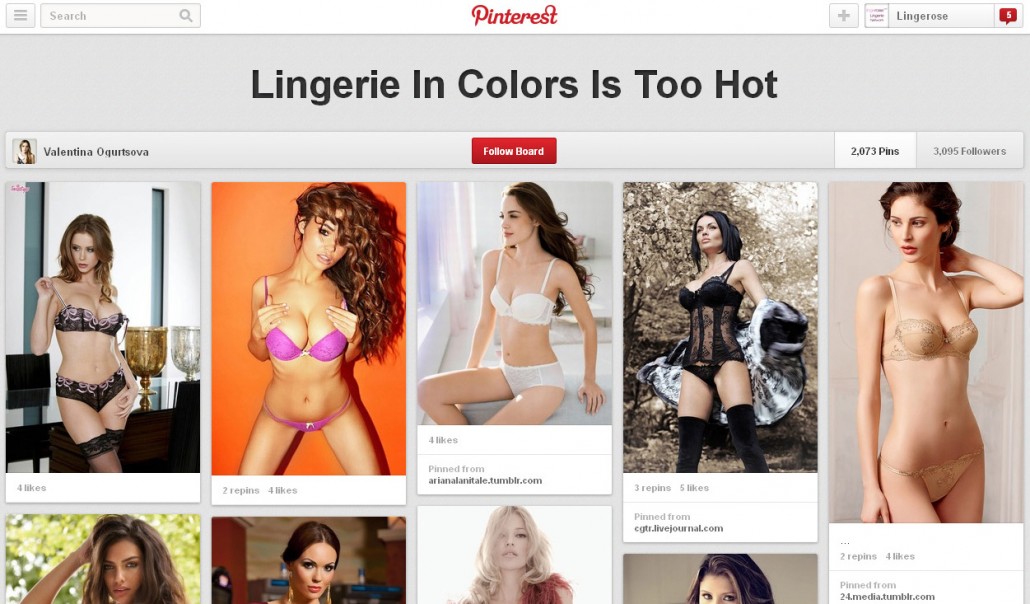 As we may see, pins added to that board received a lot of signals (likes and repins).
I want to describe another user as well. In the first 10 results there were 4 Lingerose’s photos repined by “Amber Surdam” – what’s so special about her – let’s have a closer look at her account:
172 Boards
27,148 Pins
3,323 Likes
2,859 Followers
577 Following
Again, we can notice the positive ratio of followers to following. It is a very active user as well. She added a lot of Lingerose’s pins to her “Lingerie” board. 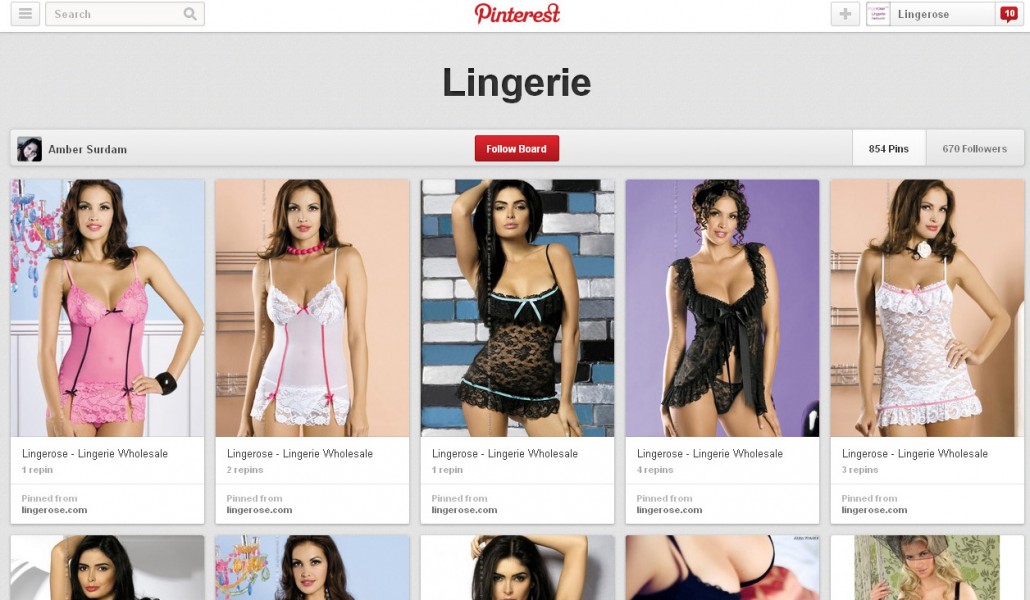 Also, in that board, pins received many signals. Another thing – Pinterest willingly indexed my pins from that board because they appeared on the very top of it.
So, once again, I want to highlight the factors which matter for the Pinterest’s search engine:
– ratio of followers to following
– number of pins added by a user
– strength of a board where pins are added (number of signals, number of pins, number of followers)
– position of pins appeared in a board – the higher pin is the bigger chance it is going to be indexed higher in Pinetrest search results

17th of June 2013
That day the results in Pinterest for “lingerie wholesale” were very interesting. They changed a lot. Why? Since the last Wednesday, I was testing a different pinning strategy. What does it mean? I stopped repining my pins to group boards and I was pinning new photos to my account only. How did it affect the results – let’s look at the first top ten: 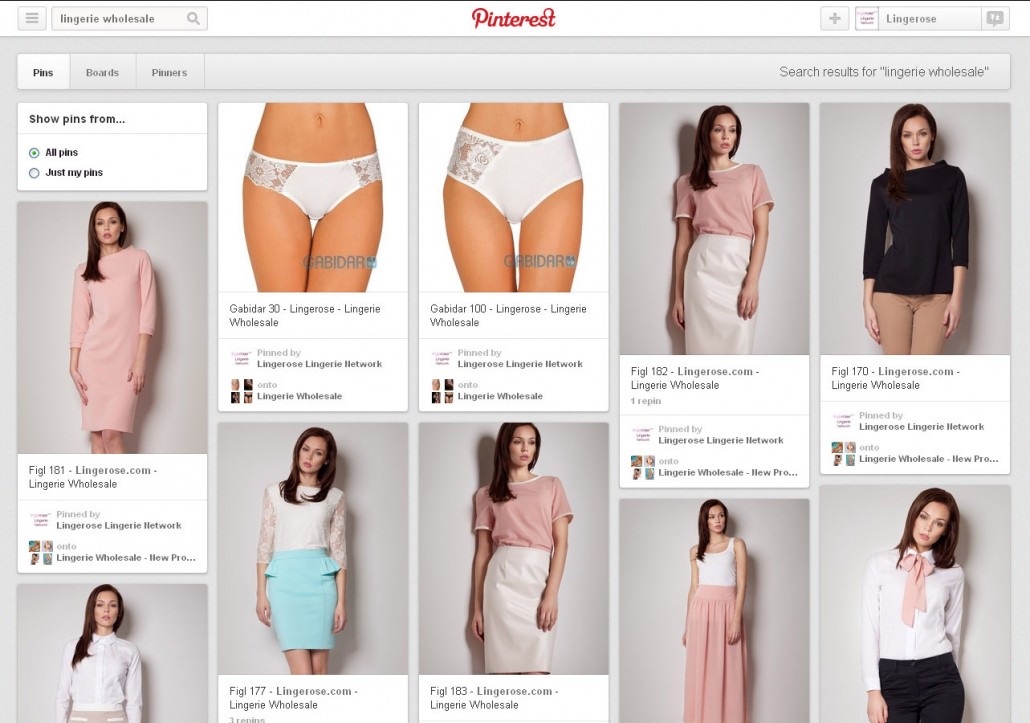 The first ten results are my pins only – it’s nothing new but… all of them come from the Lingerose’s boards only!
Checking the further pins I found another 30 photos which also belonged to my campaign.

Next months, I kept the same strategy of adding new photos to my boards only and not repining them to group boards where I was a contributor. It really worked. Below I present the results gathered in July and August 2013.

13th of July 2013
As you may see below, all the photos belong to the main and the biggest Lingerose’s board – “Lingerie Wholesale”. 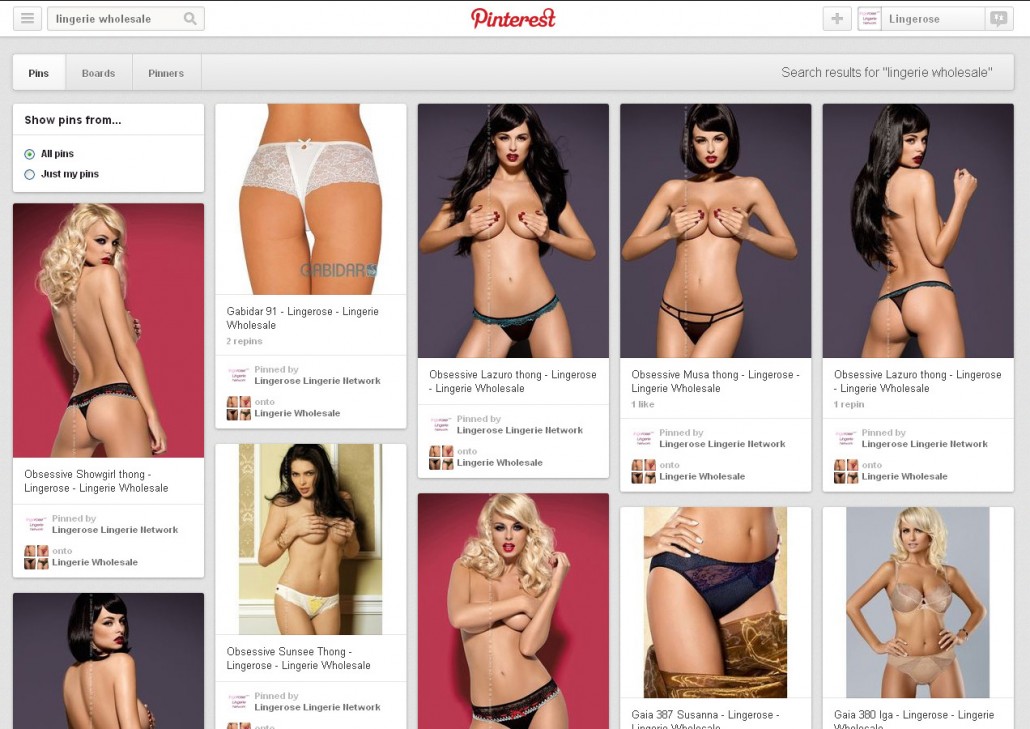 16th of August 2013
That day, I noticed the best results ever in the Pinterest’s search list. 398 pins of the first 400 which showed up for the “lingerie wholesale” query came from the Lingerose’s campaign.
So, a potential customer who typed in the searched query had no choice. He could even think that there was only one lingerie wholesale worldwide.

Below I present the top 50 results – all of them come from the Lingerose’s boards. Mostly, they belong to:
“Lingerie Wholesale – New Products”
and
“Sexy Lingerie Wholesale”
What was so special about those boards? I didn’t know yet, but I already knew that as far as I added pins to my boards only, I could be sure they were automatically displayed on the top of Pinterest search results. What’s more – at the very top. 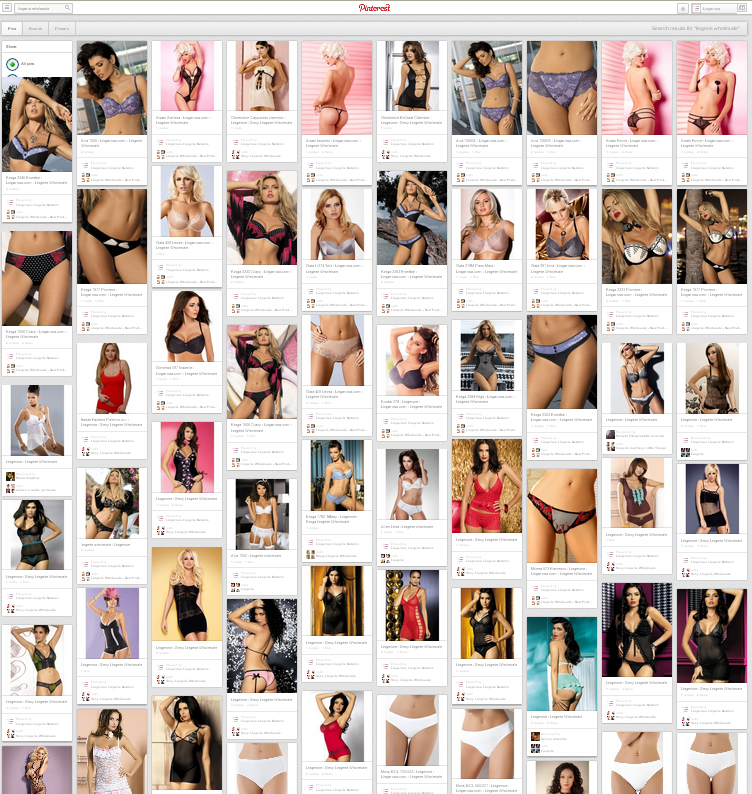 That fact made me decide to go deeper in my analysis process, but this is gonna be the subject of the next article.

In the second part of our research, I will try to reveal the most important factors for Pinterest search engine itself. I’ll check how Pinterest indexes pins and boards for specific keywords used in my campaign.

This part, concerning the factors that Pinterest’s search engine uses to build its index, will also be based on the research I did during my campaign for Lingerose.com. The aim of the campaign was not only to rank high in Google SERP for the “lingerie wholesale” query, but also in Pinterest. And I must admit that I achieved the other goal as well. The Lingerose’s pins captured Pinterest’s search index for the “lingerie wholesale” searched term.
Describing the details and results of the campaign I will try to answer what really works or matters for the Pinterest’s search engine algorithm.
Except for my most important search query, in this part of the book I will focus on some other keywords as well. This approach will give us a broader view on the Pinterest SEO field.